Sanders, who is both in the NFL and College Football Hall of Fame was introduced with an excited introduction that was watched by thousands on Facebook, Instagram, Twitter and music provided by the march band “Sonic Boom of the South” that was fitting for a person that is known as “Prime Time”.

For “Prime Time” this is his first head coaching job on the college ranks. Sanders though is currently the offensive coordinator at Trinity Christian where his son currently plays.

As Coach Sanders said in his speech when being announced as the Tigers 21st head football coach is a blessing from God. This hiring is a win for Sanders to get an opportunity to show he has what it takes to coach on the college ranks. He spoke on bringing back the winning tradition that Jackson State is known for and they have not had a winning season since 2013. Coach Sanders also talked about molding men not only on the field, but to be productive men that can go back into the communities to give back. He spoke on now going into parent living rooms and letting them know that Jackson State is the place for their son to play Football and we can get them to the NFL just like the Power 5 schools and have them to be molded in to solid men at the same time.

But this is a win for Jackson State as well. This hiring gave them a coach that has major name credibility. Someone with a name that can get a few recruits to play for the Tigers that they would not normally get to play for the Tigers. Also, this could also be a wonderful marriage for the school for fundraising for the athletic department. Also, attendance should improve once again. Jackson State averaged 33,762 for five home games to once again lead FCS in attendance in 2019 and that number should increase in 2021 Spring Football Season.

Coach Sanders hiring at Jackson State should give national recognition for the SWAC and HBCU Football as well. Hiring “Prime Time” can also bring good recruits not only to Jackson State, but to the rest of the SWAC and HBCU’s to show that players from our schools can make it to the league. 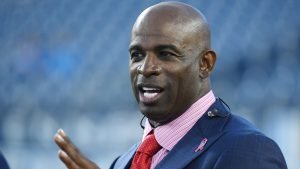 I am 100% in agreement with this hiring of Deion “Prime Time” Sanders to become the 21st Head Football Coach of Jackson State. This is not only a blessing for Jackson State Football, but HBCU Sports as well.

About Willie Alex Hines 913 Articles
A lifelong sports fan and follower of HBCUs, Willie Alexander Hines is an expert on any sport with tremendous recall of history and newsmakers.